Why do Gaming apps generate revenue mainly for the App Stores

The mobile and gaming industry has been active for years now and has generated several dollars for mobile app developers, Google, and Apple. Although it was initially not deemed necessary by either google or apple, it became a significant stream for revenue for both the app store and google play. Recently, mobile apps are used in various industries, including the gaming industry. Companies can generate income with mobile apps in diverse ways. For all the revenue generated, sixty-two percent of google play and app store revenue is generated from gaming apps via gaming transactions.

Gaming apps primarily generate revenue for google play or AppStore mainly because of the game transactions. For instance, to get a gaming app, one has to download it from the app or play store; therefore, they will generate money from the download and other future actions that users take while using the app, like updating. Moreover, through in-app purchases google play, and the app store charges some transaction fees, which is revenue-generating. Other game app developers sell their apps by doing so; the stores will be making income.

Gaming apps are generating billions of dollars of revenue daily as the number of users rises. 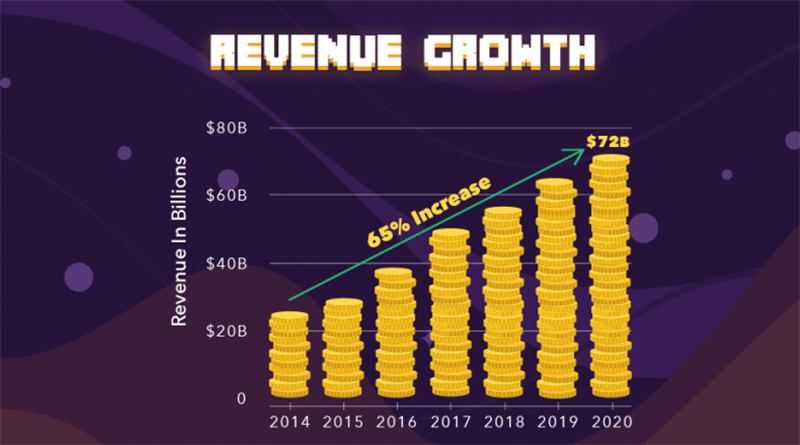 Revenue for the App Store

According to research conducted in 2018, the app store was the leading store with revenue generated from mobile gaming.

Distribution of worldwide mobile app revenues in the Apple App Store from 2018 to 2024, by category(in U.S. dollars) 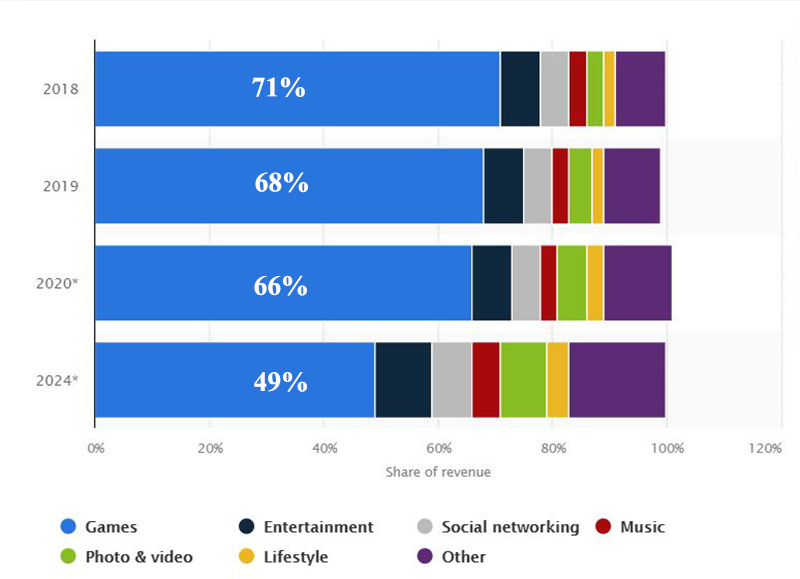 The graph of revenue distribution of categories on the App Store, Source: www.statista.com

Now, the app store’s revenue on its iOS platform was around thirty-two billion dollars, and this figure is increasing daily.

Distribution of worldwide mobile app revenues in the Google Play store from 2018 to 2024, by category (in U.S. dollars) 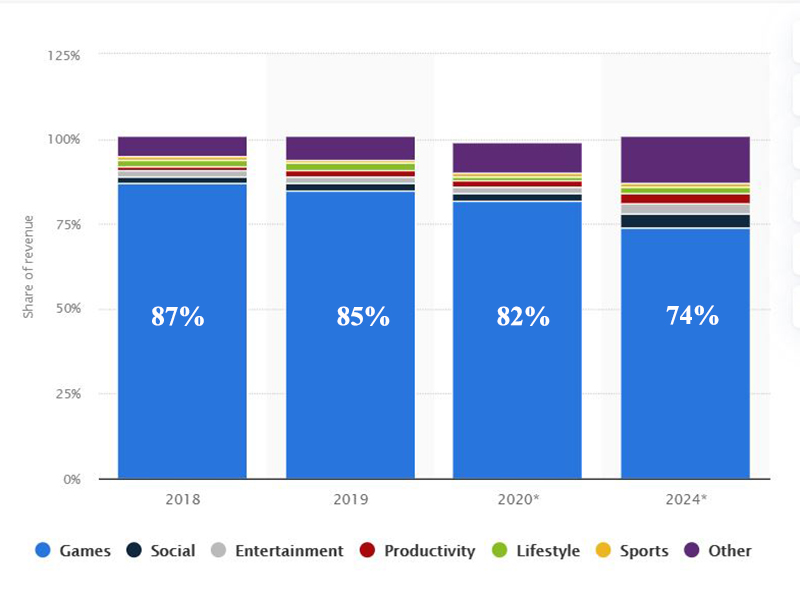 The graph of revenue distribution of categories on the Google Play, Source: www.statista.com

Why do game apps generate so much revenue?

Mobile games are popular, and eighty percent of revenue app stores generate comes from gaming apps. Game apps generate much money because of the game monetization method that most developers use. This method allows the game apps to make money for copyright owners and developers. Additionally, mobile games make more money because of the strong fan base and brand, which can spike into revenue streams.

The other reason why mobile games apps generate more cash is because of event marketing which brings together gaming fans. Such events can make die-hard followers include charity matches hence more revenue.

The ratio of game apps in app stores

The number of gaming app in the App Store, Source: www.statista.com

The number of Gaming app in Google Play

Most Favorite Game App on Both App Store and Google Play

Candy Crush Saga is a free-to-play match-three puzzle video game released by King on April 12, 2012, for Facebook; other versions for iOS, Android. It is a variation of their browser game Candy Crush. 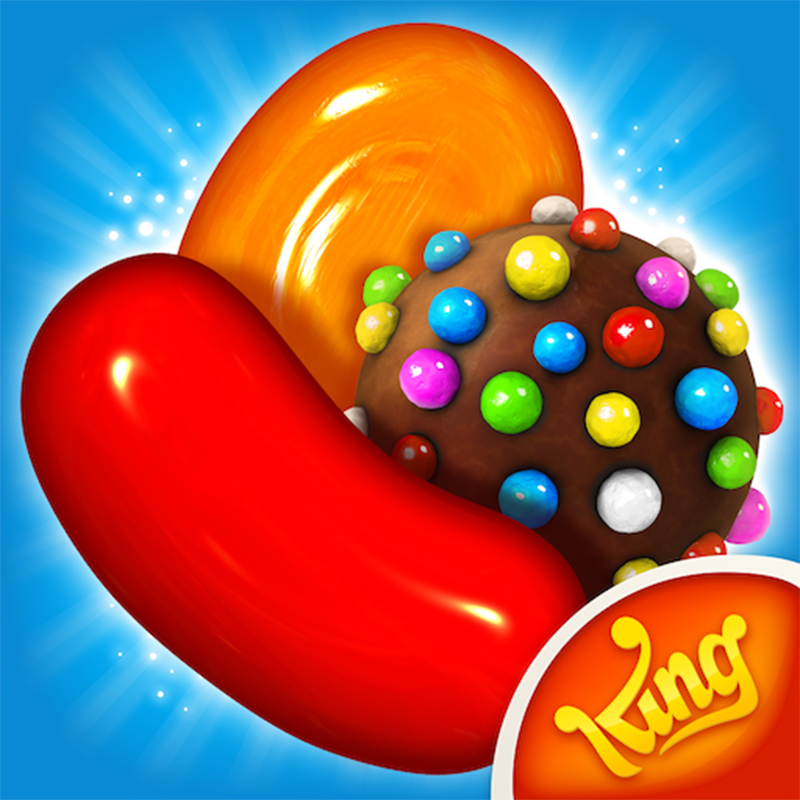 Candy Crush Saga with record revenue of 1 million US dollars per day, with a total of 2.7 billion downloads. The resounding success of Candy Crush Saga has brought the parent company a huge and desirable amount of money for App developers.

Subway Surfers is an endless runner mobile game co-developed by Kiloo and SYBO Games, private companies based in Denmark. It is available on Android, iOS and uses the Unity game engine

In 2017, Subway surfers were the game with the highest number of downloads in the App Store, in 2019 the total number of downloads reached 2.7 billion. The huge revenue of hundreds of millions of dollars that this game brings to the parent company is also very admired

What makes game apps so different from other categories of apps?

Every app is developed or created for a specific purpose, and so game apps are. There is much difference in terms of content, purpose, and even how game apps are structured. Perhaps, the way you can use the game app is different from other categories of apps. For example, you can find visiting more than five times the game app on your smartphone than any other app of their category. But what makes the game apps different from categories of apps such that you will wish to visit them again and again?

Here are some features that make the game apps differ from other categories of apps.

- New game levels: Game apps have several levels that will motivate you to tackle new challenges.

- Multiplayer Mode: If you wish to challenge your friend, the game app may have that feature so you won't play lonely.

- Live chat: Game apps can have a room for players to chat or socialize while playing.

- Replay and Recording: As you play, you can record the game or view a replay.

These features are more to make the game apps different from other categories of apps.

Predict the development of game applications in the future

In the world of gaming, there is more expectation of new strategies in the game development industry. The world is up with new technology every hour, which can merge new ideas in game development.

Today, thousands of different game studios are competing to be the world champions in gaming. Although some factors can hinder this, what matters is which strategy they should incorporate when developing games. As the globe continues developing, players opt for the most featured games with the best features.

Due to improved ideas on gaming, game developers are taking the opportunity to boost their industry by examining the demand. If we consider the game development trends of today, the gaming industry will have the best to offer in the future. For example, here are most trends that every game developer is targeting to have.

The use of a 5G network

As far as innovation in game development is concerned, network advancement will take the game strategy very far. Unlike today's games that operate under 2G, 3G, and 4G, future games are expected to have reduced latency in streaming. 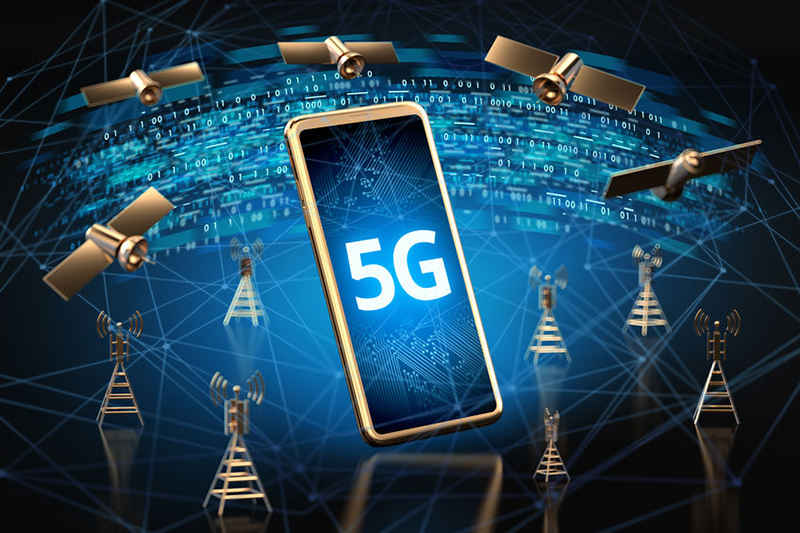 Today, the critical factor in technology advancement, 5G, is up to take the chance of being the best option. Critically, the game development with the breakthrough of the 5G network is considered to have smooth game streaming.

VR and AR are most technology that game developers consider as giants in pushing game development far in the future. The rise of this VR/AR strategy in gaming is expected to cease any problem with providing unreal games.

AR/VR is structured to have Unreal Engine 4 and 5 support, yielding good results as it continues to grow.

The eSport strategy in gaming has brought some sense, particularly in the real world of gaming, as all games involving eSport structures can equivalently expose players to real-life sports. 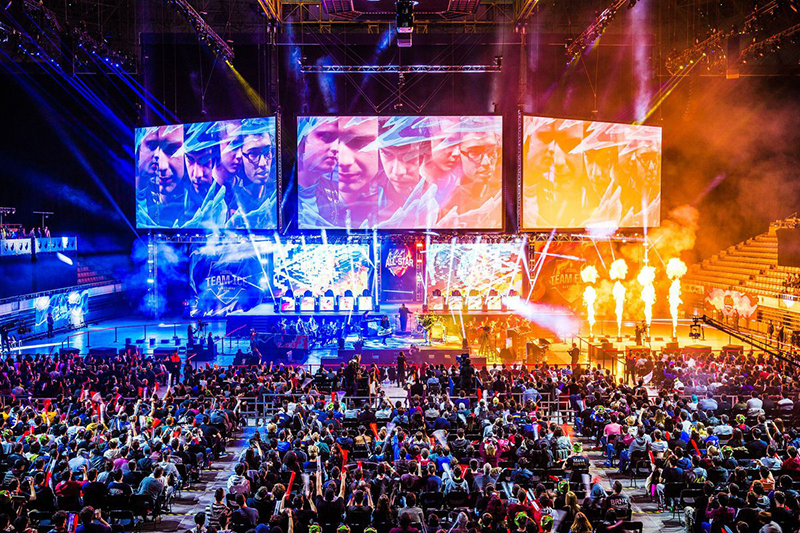 The same strategy improves as the technology improves and will impact the game development of real sports.

The sudden rise in the popularity of mobile devices and technology has fueled the fame of the app industry. Mobile games apps happen to be among the most popular apps generating up to eighty percent revenue to app stores. The sector is productive and expanding every year, and this means more revenue to app developers and the google play store and app store.

We hope the information from this article is useful to all of you. Please give us your opinion on this article, thank you, good luck